A Heritage of Chasing Trophies

A Heritage of Chasing Trophies 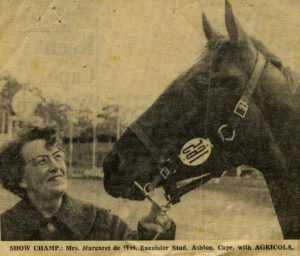 Heritage Day is an invitation to connect with significant points of our history, so that we can give them due respect, learn from them, and add context to the present.

Normandy Stud has been in existence for nearly 50 years, which gives me plenty of history to explore. Of course, my mother’s family was breeding horses long before this, so I come at the tail end of over 100 years of the pursuit of champions. It’s intriguing to imagine an extended de Wet family trophy cabinet.

My grandmother’s most treasured trophy, I’m sure, would have been for San Louis’ Guineas win. He was the only classic winner in her colours, and his recovery from severe illness was the stuff of fairy tales.

As a little boy, I was intrigued by another trophy awarded to her, for consigning the champion yearling of 1964, Agricola. That selection was made purely on the basis of conformation. He won five races, but this trophy was the only one that came his way.

It is a reminder that we breed for the racecourse.

We have been enthusiastic supporters of Ready to Run sales, because there is a closer connection between this particular sales ring and the racecourse.

In our second year of consigning to RTR – in 1989 – we sold the top-class sprinter Knife Edge. Two years later we sent the Germiston November Handicap winner, Quick Wit, but ended up keeping him in training ourselves after he didn’t make his reserve price.

A couple of years ago (thanks to John Freeman’s catalogue library) I went back through every RTR draft we ever consigned. It struck me that, to some extent, RTR used to be ‘last chance saloon’. Many of the horses that went to RTR in the early days had run out of options, and may not have been suitable for any sale.

Times have changed. It’s too expensive to prepare two-year-olds for RTR if we don’t believe they warrant the investment.

We now regard RTR as a special kind of select sale. Our draft is based upon our own produce that we thought needed extra time, or those that didn’t achieve their reserve prices on yearling sales. These are augmented by some that we have pin-hooked (following an intensive selection process). So, it’s a highly curated line-up in which we have confidence.

We believe that we have some great prospects again this year, with a draft including two-year-olds by Silvano, Captain Al, Dynasty, Querari, Gimmethegreenlight, Trippi, Global View, Flower Alley, Twice Over and Master of My Fate. It’s one of the best line-ups of sires I’ve seen from any vendor.

In recent years, our RTR drafts have included Sergeant Hardy, Crowd Pleaser, Bishops Bounty, Nordic Breeze, Wonderwall and Barrack Street. Not only do these ‘trophy earners’ come at a lower cost than might generally be expected at a yearling sale, but they come at a higher strike rate.

There are additional reasons to shop at RTR. Firstly, even though all the two-year-olds might not be ready for a race – we do have a Silvano, after all – they’re a lot closer to seeing a racecourse than if they’d been bought as yearlings. Secondly, buyers can see them galloping with a jockey on their backs. Finally, apart from the RTR sales race for which they all qualify, the pin-hooked horses are paid-up for the sales races or added stakes incentives relating to the sales we bought them.

With RTR, we hope to be building a new family heritage. In nurturing and developing these young athletes, we’re drawing on a long history of horsemanship. This isn’t a game one can play with smoke and mirrors!

Given a choice, I’m sure my grandmother would have had her Guineas trophy over a yearling sales beauty pageant any day.

The metaphorical Normandy Stud trophy cabinet has Queen’s Plate (three), Cape Derby (two), Guineas (both colts’ and fillies’), Gold Cup, Cape Flying Championship, various Merchants, Nurseries, and many others. The one that evades us – after five second-place finishes – is The Met. Could our 2019 RTR draft finally deliver this missing piece of silverware?

This article first appeared on the Turf Talk newsletter. Following this link to sign up:
http://www.turftalk.co.za/get-turf-talks-daily-newsletter/